The name Team JJ was first coined at the Wales GB event 2015, when many of the original team members were part of the organising stage team on the Sweet Lamb stage. The event that year saw horrendous weather and it was said that Team JJ were battling on to make sure the stage ran.

From that day the name began to be used and stage commanders and event organisers started to ask if the group would be available to marshals on their stages and events, therefore the name Team JJ was used more to identify this group of marshals.

In late 2016 after another successful Wales GB it was decided to approach the then MSA, now Motorsport UK,  to request that the Team received official recognition as a club. The relevant forms were completed and constitution agreed and in late January 2017 the MSA granted Team JJ recognised marshal club status.

As a marshals club we pay no affiliation fees to Motorsport UK, therefore we try and keep the membership fee as low as possible whilst having funds to run the club.  However this does mean our members are not permitted to compete in the clubs name and we as a club are not permitted to arrange motorsport events, but we can organise training events.
Members are permitted to be on organising teams for events, as well as act as Stage Commanders, stage safety officers and other roles. Should you wish to compete you must ensure that you are also a member of a Motorsport UK affiliated motor club.
​

As well as a strong marshal base in the club of which we are indebted to ensuring events run as smoothly as possible , as in stage marshals, timing marshals, radio marshals, radio coordinators attending many events throughout the year in England, Scotland, Wales and Northern Ireland, and some visits further afield, the club also has a strong pedigree of members being involved in the organisation and running of events. 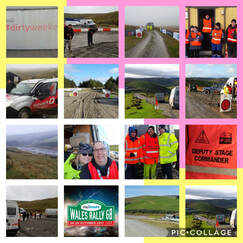