The role of the marshal is paramount in ensuring the event runs, without the army of volunteers events would not be able to be organised,  ran and managed. The roles are varied and staffed by volunteers, taking time from family and using holidays to commit to events.
This is the from the Clerk of Course and all roles on the event. These pages will  cover the roles and responsibilities of the roles, some in more depth than others.
In Team JJ MC we have members that have and do cover the roles of  Clerk of Course, Safety Officers, Safety Car Crew, Chief Marshal, Chief Timekeeper, Stage Commander, Radio Controller, Radio Crew, Timings Roles, in Stage Marshalling, Rescue Teams, Recovery Teams. If there is a role then we will have a member that has experience and therefore will be happy to help you in your motorsport journey.
The training page on this website will give you details on training and becoming a marshals.

Some of the roles when marshalling on a stage rally
Timing roles - these can be at: Arrival Control - where the time is recorded of their arrival at the stage. Start Control - where marshals record the time the vehicle started the stage, Flying Finish - where the marshals records the time the car cross the end of the competitive part of the stage, Stop Line - where the marshals record the time with the competitors the time they cross the competitive part of the stage. This will then give the competitor their stage time.
In stage roles – In stage marshal – will be asked to look after a particular area, this could be a junction on the stage, a footpath, a spectator area or a know area that may cause an issue with the smooth running of the stage. The number of marshals at a particular post will be determined by the Chief Marshal in conjunction with the Stage Commander, Safety officer, CoC and Safety delegate dependent on a risk assessment. The Stage Commander will allocate marshals depended on experience and ensure that new marshals are buddied with experienced marshals appropriate for that area.
​Sector Marshal – will be an experienced marshal who acts as the eyes and ears of the Stage Commander and takes responsibility for particular area of the stage. This could be a number of junctions close together, or one junction that may attract a large number of spectators. They will guide the marshals and ensure any issues are dealt with quickly, reporting messages back to the stage commander via the radio network.
​
​ 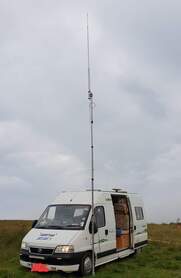 Radio Crews – There are a number of radio roles on a stage.
The Motorsport Association have two dedicated frequencies for use of stage rallies, these are in the 81 FM range. Motorsport UK produce a radio marshals handbook https://www.motorsportuk.org/wp-content/uploads/2019/08/radiomarshalhandbookrevxiiaugust2018-1.pdf

Start radio – they are responsible for passing messages between stage commander (who is based at the stage start) and radio control (normally in HQ), keeping all aware of developments on the stage and the event. They pass details of cars starting the stage, and at completion of stage the total number started along with times. Normally an experienced radio crew.
In stage radio – Placed at various positions on the stage to ensure smooth running of stages and ensure cars continue through the stage. Radio crews are asked to note the passing of cars and should a car be missing then the radio controller will sweep the stage asking radio crews if they have seen the car, this will then identify the location the car is between and the a physical look will begin.
Radio crews are also responsible for passing relevant messages to control from marshals and sector marshals on activities on the stage.
​Stop Line radio – similar to the start radio, they pass messages between the Stage Safety officer (positioned at the end of the stage) to control,  these messages may be from competitors on issues in stage, or cars missing from the check that the stop line marshals conduct on cars into stage. They pass the total numbers of cars at the stop lines along with relevant times. Normally an experienced radio crew.
Tracking radio – On some events there is a dedicated tracking system, this uses a different frequency to the Motorsport Medical and Safety Network. The role is primarily to track cars through stage, the tracking radio at the start will advise the number of the cars that have entered stage in batches of three, the control on the tracking network will ask the next point normally 5k into stage for the car numbers they have had past, and so on until all tracking locations have been checked including stop line. Cars that are identified as not reaching a location are then reported immediately to the Motorsport Uk network for their checking and possible deployment of rescue and recovery crews. As this network is constantly checking cars through stage a missing car can be identified relatively quickly and not waiting for it not to arrive at the stop line. 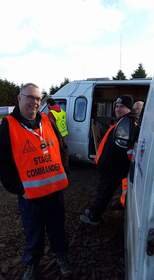